This blog will review our firm’s involvement with Commonwealth v. Batts, currently on appeal before the Pennsylvania Supreme Court. At issue in this case is the degree of procedural due process required to impose a discretionary life without parole (LWOP) sentence for a juvenile convicted of homicide before the age of 18. This kind of sentence did not exist until the U.S. Supreme Court’s 2012 decision in Miller v. Alabama.

In Miller, the U.S. Supreme Court held that mandatory LWOP for a juvenile convicted of homicide violates the Eighth Amendment. Our client, Mr. Batts, received a mandatory LWOP sentence after his 2007 murder conviction for a crime committed when he was 14. The Supreme Court’s decision in Miller rendered this sentence unconstitutional, and the Pennsylvania Supreme Court remanded the matter for a re-sentencing.

Mr. Batts was re-sentenced to LWOP in May of 2014. The Superior Court affirmed this sentence in a 2-1 decision. The Pennsylvania Supreme Court agreed to hear our appeal in April of 2016. The matter is in the briefing stage, and we do not expect a decision for some time.

The opportunity to work on a cutting-edge issue of constitutional law does not present itself every day. Our firm has been fortunate to have the assistance of the Juvenile Law Center (JLC), a non-profit public interest law firm specializing in juvenile justice reform. See www.jlc.org. In conjunction with the JLC, we hope to establish a fair procedure for Pennsylvania trial courts to use when deciding whether to impose this novel sentence.

Drug Convictions Will Cost You Your Financial Aid (Yes, even marijuana.) 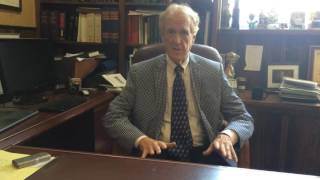 9 Tips to Remember After a Slip and Fall Accident